All through my gaming career I spent countless hours in various games farming or collecting what was called "epic loot". When I came to EVE Online it almost seemed like hoarded information as to where to find such loot. Of course when I started all of that loot could only be obtained through contracts, and now that it has been incorporated into the market, I'm sure many people wonder. "Where do I find items like this?". When I asked players where to get it, they were reluctant to tell me, or acted as if they didn't know. Unlike those people I'm going to tell you were to find it all.

The "Epic Loot" in EVE consists of so many types of items. Deadspace items, Officer items, Faction items, and even specialty skill books that aren't sold in NPC bookstores. Now a lot of different faction based items can be obtained through LP stores all across EVE, but even better faction items can be found elsewhere, and without going through countless monotonous missions. 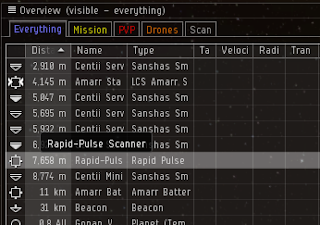 One of the most common areas to find special items are in missions. Not very many people know that items like this are sometimes hidden in structures inside mission deadspace sites. Any time you do a mission make sure to have an overview tab that shows EVERYTHING. When you switch to that overview profile, there are structures that have a icon next to them to show that they have the the ability to be destroyed. Usually there are certain ones that have a chance to drop something, and many that will never drop anything. Things like walls, elevators, and junctions are a few that do not. Think of the structures and what their actual purpose would be. If you would store items in it then it's probably best to try to blow it to bits. For instance, a cargo bay or a silo, things made to store things. As for them dropping something rare, well that's a game of chance, but dropping something common is .... common. Some of these structures might take a bit to destroy, so prepare yourself with cheap ammunition when doing missions for this purpose.  As for the loot you can find various things, and the level of the missions does not seem to restrict what drops from the structures. I've found various hardwire implants worth 6-20m in level 1 missions,  science books worth 10m each in level 2s, more 20m implants in level 3s, and faction items in level 4s. Keep in mind I've destroyed more structures in level 4 missions than any other, but what I found in the low level missions was after only doing a couple of each level. 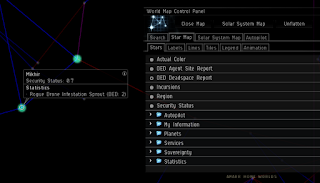 DED Sites are probably the best way to find your epic loot. You can find these sites by opening up your map, and choosing DED Deadspace Report in the Star Map list. This highlights the systems where every public DED site is, and listing it's rating. The rating tells you what the biggest ship is that can be used to enter with. Rating 1 is for frigates, 2 for destroyers, 3 for cruisers, 4 for battlecruisers, and 5 and up for battleships. Keep in mind you do not have to use this type, that is just stating the largest ship that can go through the gate. Once you're in the site, you will find a "named" officer ship, and that ship has a great chance to drop faction or Deadspace loot. To give you a better idea of how to spot named ships, and what type of loot to expect here is the Deadspace page from EVElopedia.

Exploration/Expeditions
Once you look at the map for DED sites/complexes, you'll notice there are not very many at all. The reason being is that most are hidden. To find these sites you have to have the ability to scan with scan probes, and hope you find one scanning a system (they are categorized as "unknown"). Once you find one you have a good chance to get an item from the officer as you are probably the only one that has visited the site, where the public ones are frequently visited by players that check them constantly for items (This type of behavior is also known as "plexing"). Here is the list of Complexes that can be scanned, and their name. This list can help you identify the site, and what ship to use.

One of the better things about the scanned complexes is the constant ability to start an "expedition" from one. What this means is that an incoming transmission will come in telling you to visit another site to help them in some sort of way. When this happens you will see the expedition in your Journal under the Expedition tab. It will tell you what system to go to, and when you get there right click the expedition in your journal, and choose to "Warp To". You don't have to scan another site. Keep in mind, expeditions sites are specific to the player that finds them. No one else can see the site, but if an expedition leads into low-sec expect for players to try to scan you down to kill you.

Even though these are only a few ways to get "epic loot", they are great ways for players just starting out, or players new to complexes, and expeditions. Enjoy, and happy hunting!
Written by DBrown at 8/30/2012

Email ThisBlogThis!Share to TwitterShare to FacebookShare to Pinterest
Labels: Items and Modules

Newer Post Older Post Home
Subscribe to: Post Comments (Atom)
Are you a first time visitor?
Get ready for the EVEoLution Carnival and Giveaway!
Check out our other informative articles, including guides, charts, "Making ISK" articles, our ship database, 3rd party app reviews, and more! Also be sure to check out our twitch video feed with in-game interaction offering you the best possible way to learn all about EVE Online.

Show your support by donating ISK to help PLEX the accounts that give you the content you see. Donors can request to be shown below in the donation list; all other donors remain anonymous.

Donations can be directed to the corporation "Prope Exitum" {PROPX}.